I’m excited to start sharing some nursery updates.  As I mentioned in my nursery mood board, we wanted to a gender neutral room and decided that turquoise colored walls could be fun for either a girl or boy’s room.  I wouldn’t normally pick such a bright paint color, but hey this is a nursery, let’s have some fun!

Of course picking the right shade of turquoise is another story.  Since it’s already a bold color choice (for us), we didn’t want to go too bright with it.  We also didn’t want it to be too minty or too blue.  Okay, we may have gone a little nuts when trying to chose the color with quite a few paint samples, and then we even mixed some of those colors together in search of the perfect shade.  Eight paint patches on the wall, that’s normal right? 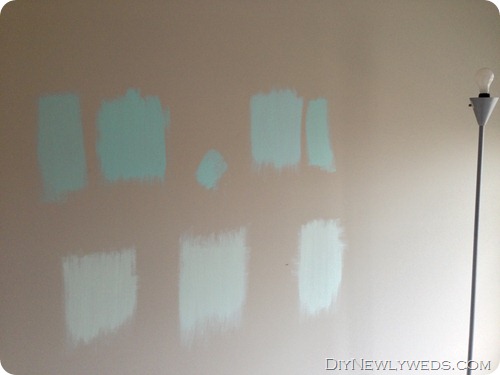 Now, it would probably be helpful if I could remember what each of these colors are, but these pictures were taken a while ago (there’s been more nursery progress than I’ve let on) and sadly I have no idea which color is which.  But fear not!  I still have the sample paints so I painted them on a piece of white paper so I’d be able to share which color is which.  Whew. 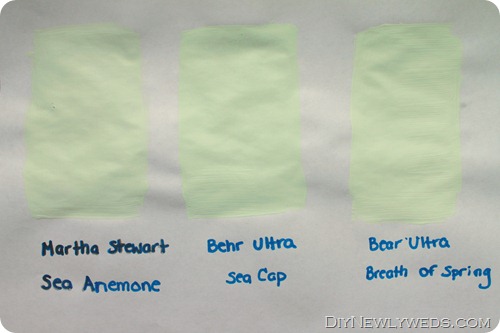 Before tackling the walls, we painted the ceiling with Sherwin Williams HGTV Home line of paints.  The previous owner had painted the ceiling an off-white color, but we prefer the look of a crisp white ceiling.  We went with the HGTV line for the ceilings because it is a less expensive option, but is still zero VOC.

Here’s a progress shot of the room after the ceiling was done and we started cutting in with the turquoise paint.  Sorry for the iPhone pics, but after working on the room, this pregnant lady didn’t have the energy to get the real camera (stairs + pregnant lady = lots of huffing and puffing!) 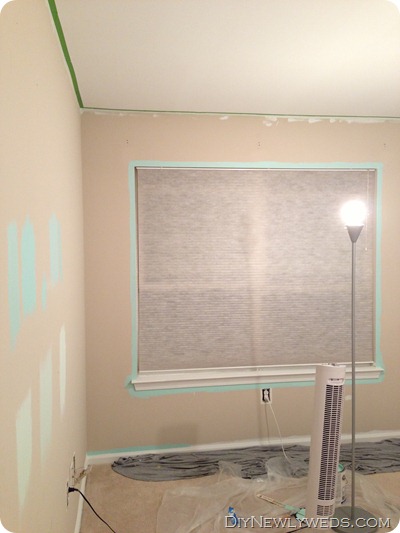 And now for the room after one coat of paint: 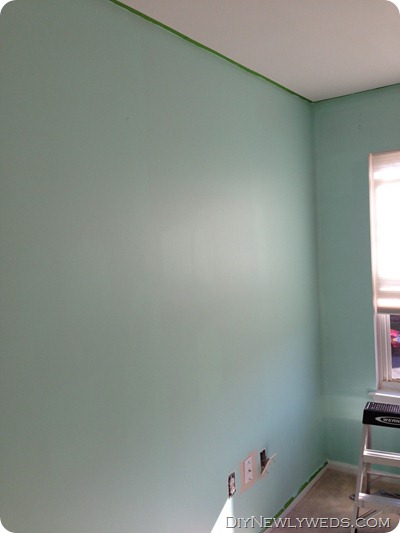 Aaaand, the finished walls.  Sorry to only show a few corners of the room, but I didn’t take any pics of the walls while the room was empty and there’s some furniture in there now, which I’m keeping under wraps for the time being, mwahaha!  Plus, I think seeing the color next to white doors gives a better idea of the shade (because between my camera and individual monitor settings, there’s bound to be some differences between the photo and the color in real life.) 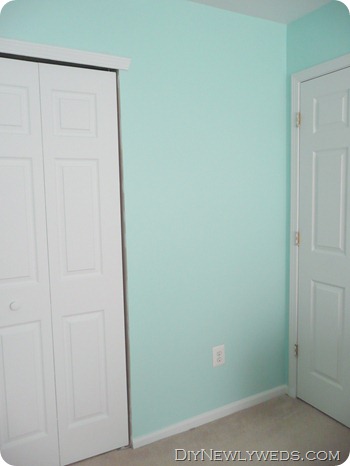 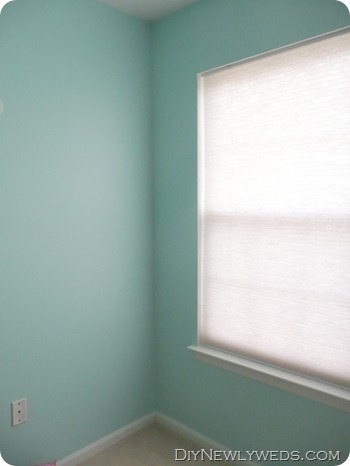 And now for a shot of the baby’s big brother guarding the room, gotta protect those baby shower goodies! 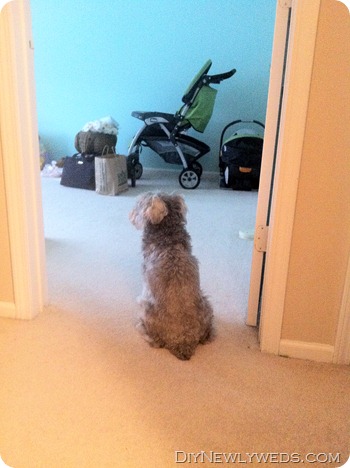 I really like the quality of Sherwin Williams paints, the walls had a very nice finish after 2 coats of paint.  However, I was hoping the no-VOC paint would mean it wouldn’t be smelly at all, but there was still a slight smell from the paint.  The smell was less than a regular paint would leave behind, but since this is a baby’s room we still did a considerable amount of airing out the room with the windows open and a fan going to get the paint fumes out.

I’m also really happy with how the paint color turned out.  At first I was worried we went too bright or bold, but once we got some furniture in the room it looked just right.  I’ll be back soon with an update on the furniture!

Love the color! It will work great for a boy or a girl!!

We painted our nursery a VERY similar color! SOOO I obviously love it! How fun!

Lena, your nursery is so cool! I love the colors you used next to the turquoise!