We’ve been updating our fireplace pretty much since we moved into our house.  It’s gone through several phases and is finally nearly complete!  I’ve probably talked more about the fireplace than any other thing in our house.  Here’s a reminder of how far we’ve come:

Since they way-before photo was taken, we added an expanded mantle shelf, hid the flat screen tv cables, painted the brass accents black, and painted the entire fireplace mantle white.

Now we’re onto the fifth, and final, phase of the project – tiling!  We’ve done a few tiling projects in our home, including our kitchen backsplash and bathtub accent border, so I’m no stranger to tiling.  For this project, we decided to go with multicolored glass mosaic tiles as they have been pretty easy to install based on our past experience.  I like glass tiles because they have a smooth finish, unlike some natural stone tiles, which means that the adhesive and grout wipes off easily during installation and I don’t have to worry about it getting stuck in little crevices on the tile’s surface (a problem we ran into when tiling our bathtub).  I also really like mosaic tiles for this type of project because no tile cutting is involved.  I just cut the sheet of tile to the size we need with scissors and that’s it, the actual tiles themselves don’t get cut.

I got the fireplace ready for tiling by taping off all of the painted areas (it’s hard to see in the photo below, but I taped off the inside of the mantle top and sides).   Our existing fireplace surround was a black stone material and since we had no idea what was underneath of it and it seemed like we could get tile to stick on top of it, we decided to take the easy road and tile right over it. 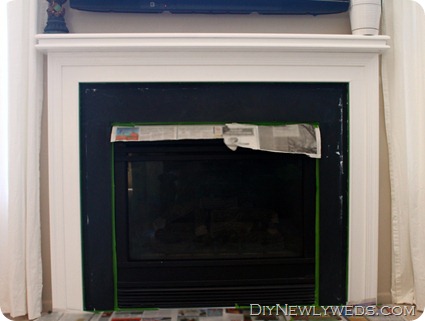 I used a pre-mixed tile adhesive that we had left over from a previous project.  This is the only type of adhesive I’ve tried, so I don’t know how it compares to others, but it has worked great and has been very easy to use in my experience.  It’s by Tec and is available at Lowes. 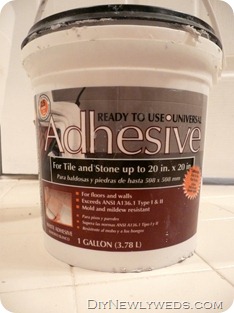 Now, onto the fun stuff!  I got to work by spreading the adhesive onto the fireplace and sticking the tiles on top.  I’ve previously detailed this process in my kitchen and bathroom tiling posts, so I’ll spare you the details this time around.

The tiles we chose are from Home Depot and are sold in 12” x 12” sheets for $5 in my store.  I needed a total of 5 square feet for this project, so all of the tile ran me a total of just $25.  That’s pretty good, in my opinion, for a project that should have a big visual impact when it’s done. 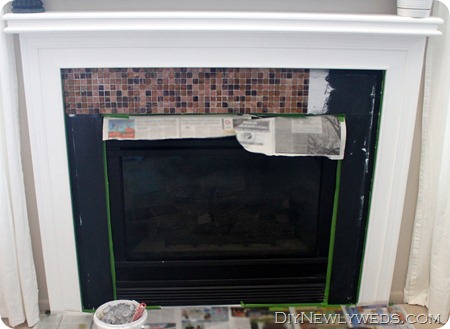 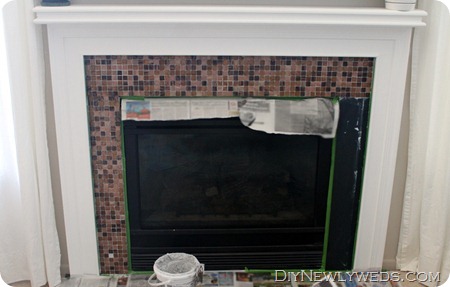 It took me about 2-3 hours to prep the entire area and tile it (about equivalent to the length of a terrible TV sci-fi movie I inexplicably decided to watch during the project).  I wasn’t in much of hurry though, and may have taken a snack break, so it was a probably a shorter project if you count only my hard-at-work time.

And finally, here’s how the fireplace looks with all of the tiles applied: 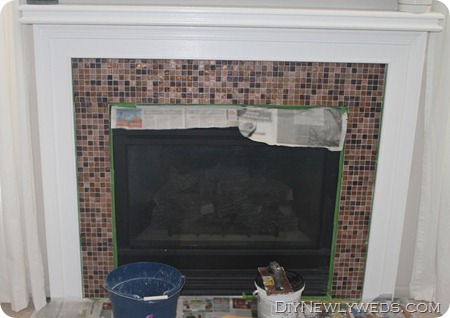 The tile adhesive requires over 12 hours to dry for a project this size, so I wasn’t able to get to grouting this weekend.  But grouting is on my agenda for this coming weekend, so hopefully I will be able to get d-o-n-e!

What do you think so far?  What projects have you been working on recently?