I hope everyone had a wonderful Memorial Day!  In between relaxing, barbeques, and spending time with friends in family we squeezed in some DIY projects.  And I finally finished a project I had been working on for much longer than I should have.

Last year, I bought this honey oak wood tray at a garage sale for just $1.  The finish was nothing to brag about, but I liked the cute shape and knew I could refinish it. 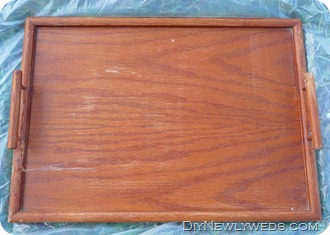 The great part about this project is that I used only supplies I already had on hand, so the entire tray cost me just 1 buckaroo!  I started to refinish the tray by lightly sanding it and then applying a spray paint primer.  I knew I wanted it to be white, so then I painted it using white latex paint I already had (leftover from painting doors and trim).  I had trouble hiding all of my brush strokes, so I finished my white layer with a  coating of white spray paint. 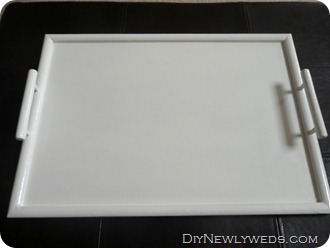 Already the tray was looking better with a nice crisp white finish, but I decided to spice it up a little with a painted pattern.  Luckily, I found a free quatrefoil stencil on the CSI project (thanks!).  The pattern was a little too large for my tray, so I scaled it to 70% on my computer before printing it. 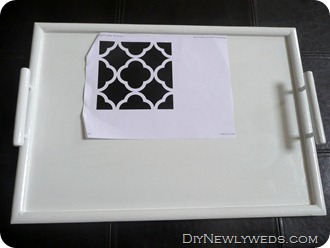 To make a stencil, I decided to cut it out of a plastic presentation cover. I taped the stencil to it, attached it to a catalog so I wouldn’t cut my coffee table underneath (Garnett Hill was my choice.  Side note: they have such pretty stuff, but it’s so darn expensive), and then I got to work with my exacto knife. 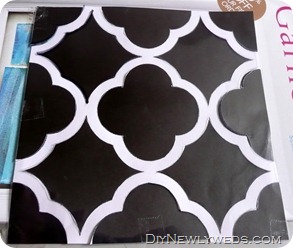 Turns out, the plastic cover was pretty thick and I had trouble cutting smooth lines with it with my exacto knife (but maybe I wasn’t using the best knife, I had bought the cheapest one at AC Moore). 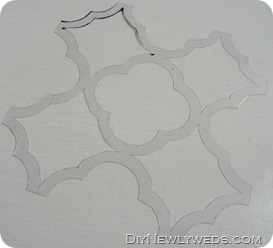 I decided to try to paint with the stencil any way, but my lines looked pretty jagged with it. 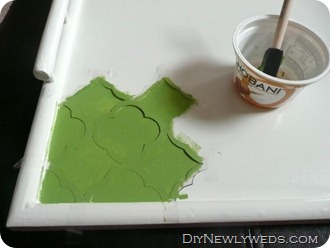 So onto plan B, I cut the same pattern out of construction paper.  The paper was much easier to cut than the report cover and it worked great at first…until it ripped about halfway through! 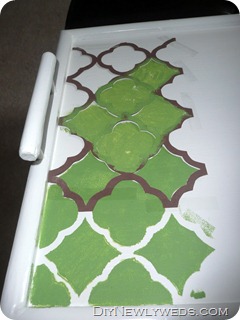 Not wanting to cut a third stencil, I went back to the plastic cover, trying to be as careful as possible.  It wasn’t perfect, but I decided to just finish the job with it and then go back and retouch later. And retouch I did, handpainting the green portion and then the white part with a paint brush. 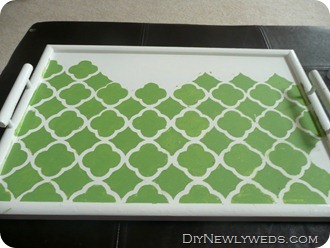 Once all of the paint was dry, I finished the tray by spray painting it with Minwax Polycrylic protective spray.  It gave the tray a nice glossy coat and will hopefully protect the paint from scratches.  The tray was much more time consuming than I had planned, but it was worth the effort.  Check it out! 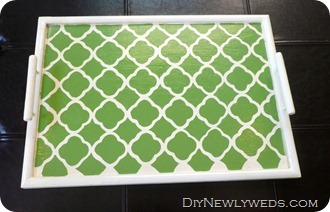 I’ve been using it in my family room on top of my ottoman coffee table.  It’s great to have a hard surface to place drinks and other stuff on top of the soft table.  I’ve been playing around with how to decorate it, and so far have a white lantern, my shell filled with shells, and a little green vase. 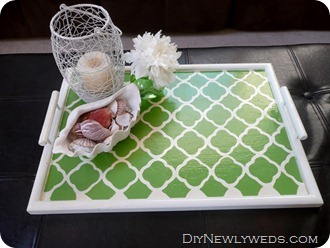 It also looks cute with a plant on it.  I’m really enjoying this quatrefoil tray and although it took a while to complete, I feel so happy and proud every time I look at it! 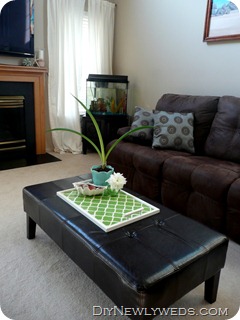 And because we all love before and afters, here’s a recap!


I'm linking this project up to The DIY Club, Today's Creative Blog, Silly Little Sparrow, Sew Much Ado, Women Who Do It All, Savy Southern Style, Tatertots and Jello, The DIY Showoff, Southern Hospitality, and Home Stories A2Z.

Very creative! It really adds a pop of color to your room!

That looks really good and only a dollar !

I love how this turned out. The green color is so fun. I've been wanting to have a tray like this on my coffee table. Thanks for sharing!

This is an awesome project! I already have all those materials; I can't wait to try this!

Love your blog!! I am definitely going to be your new follower :) I would love it if you followed me to @ for-the-luv-of.blogspot.com that would be great :) I am just starting out, but I am excited to share new recipes, crafts, and makeup.. And Giving away giveaways on mineral make-up!

Love that piece! Great job on the stencil.

What a lot of work, but it looks great you should be very pleased!

It turned out gorgeous and fantastic tip on how to make your own stencil :).

love the green and white.

I would love for you to link it up to my party that is running now. Any linky goes.

Looks fabulous!! I am planning to make my own stencil, too, so I appreciate your lessons learned!

I would love to have you hop over to my blog to look at some of my latest projects, and I would be honored if you followed me and liked my page on Facebook! I'm your newest follower! ;) Gotta share the blog love, right? Hope to "see" you soon!

Wow! You've got so much creativity and I'm admiring them all. Can you please share your creative posts at the Creative Bloggers' Party & Hop? Hope to see you there at the party :)

Love your blog and this project featuring quatrefoil (one of my favorite patterns!) so I featured your project in my roundup of crafty quatrefoil projects here. Feel free to check it out and hope you like it!