I've gone a little pillow crazy lately.  In addition to the vintage beach combing pillow I shared the other day, I made two other pillows recently.  This time they weren't from a vintage towel, but instead from fabric placemats.

I found two giraffe print placemats at HomeGoods for just 50 cents each.  Yep, just $1 buckaroo for both of them!  Since I didn't really have a use for them as a traditional placemat, I decided to turn them into pillows. 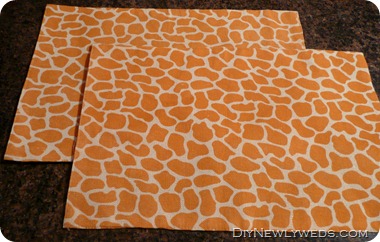 At first I was just going to sew the two placemats together, but then I realized that they were made of two pieces of fabric that were sewn together and I could just open them up and stuff the inside.  This method is way easier and now I could make two pillows instead of one! 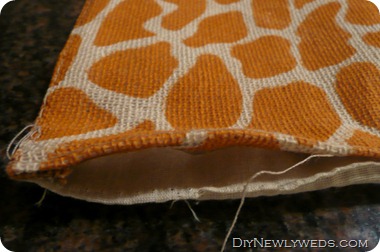 First I washed the placemats and then ironed them.  Then I used a seam ripper to create a small opening in the seam, just big enough for me to squeeze the pillow stuffing into.  I stuffed the pilllows, sewed the opening shut, and they were done!  Easy peasy! 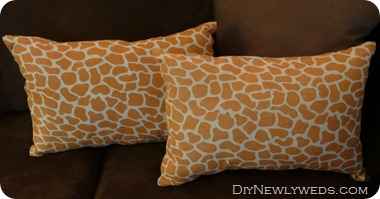 And now I can add a little animalistic touch to my sofa!  Now there's a word I never thought I'd use on my blog! 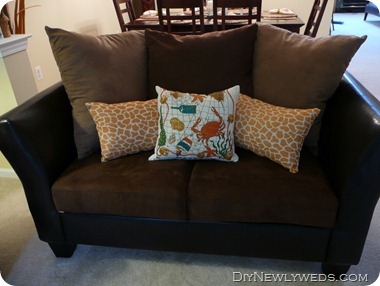 The pillows match well with my sea themed pillow, so I decided to place them on my living room couch.  I think the similar colors make the pillows work well together even though the patterns are so different. 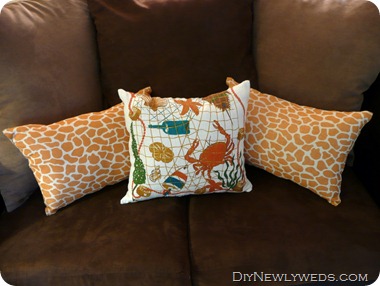 I've been keeping an eye out at HomeGoods for clearance placemats and kitchen towels these days!  Any suggestions from other things I could make pillows out of?

I'm sharing this project on Workin' On it Wednesday, House of Hepworths, Less than Perfect Life of Bliss, check out the other great projects featured!

These are so fun! Great idea!

Great, easy idea! I love it! I like how you mixed the "themes" of pillows too.

Your project is so fantastic that I featured it this week at my Hookin Up with HoH Link Party!

Feel free to stop on by and grab a button!

Awesome! And they do go well with your beach pillow!