If this blog was a soap opera, this post would be the shocking twist where you find out that I had an evil twin or that John Black was really Roman Brady with amnesia.  I’m being dramatic, but I’m about to tell you something I’ve never shared on this blog before.  I don’t eat meat.

I’m sure y’all fell off your chairs with that one.  Okay, maybe not, but I warned you I was feeling dramatic today.  No, I am not a hippie, nor am I starving, nor do I only eat lettuce.  I’m just a regular gal who happily hasn’t eaten meat in four years.  Someday, I want to share a longer post about my reasons and the misconceptions I’ve encountered, but for now I just want to share a really delicious recipe.

I made seitan for the first time.  Seitan is the protein part of wheat.  It’s made by washing wheat flour until the starch dissolves and all that’s left is the gluten protein.  And despite common misconceptions, there’s no reason for the majority of people to avoid gluten.  Gluten-free is not the same thing as carb-free and seitan is actually very healthy and is low in carbs, low in fat, and high in protein- a great diet food!

Now onto the recipe, we purchased pre-seasoned seitan from Whole Foods.  You can actually make seitan yourself, but from what I understand it is a laborious process and I haven’t tried it yet. 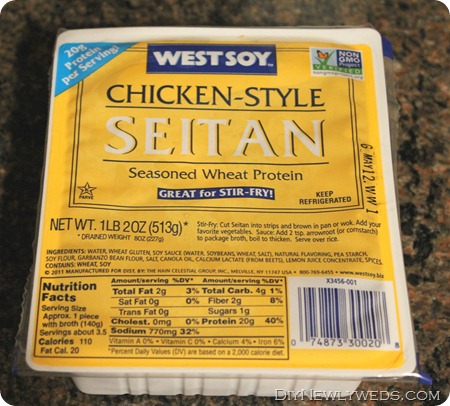 It came in a tofu-looking package, but inside the container it looked much different.  To be honest, it didn’t look too appetizing to me uncooked, but it did resemble chicken.  Seitan is often used as “vegetarian chicken” in meatless dishes. 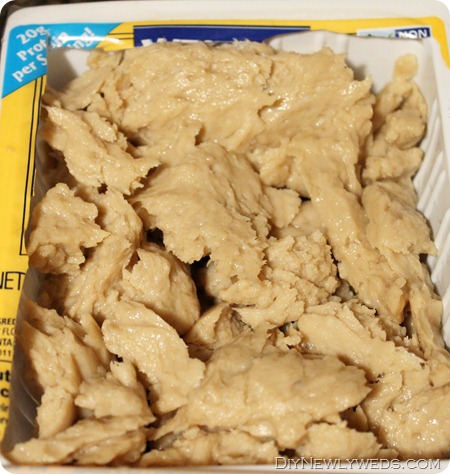 I put the seitan in a warmed up and oiled frying pan and added Trader Joe’s Soyaki sauce (similar to teriyaki sauce and I’m sure you can add any sauce of your choice). 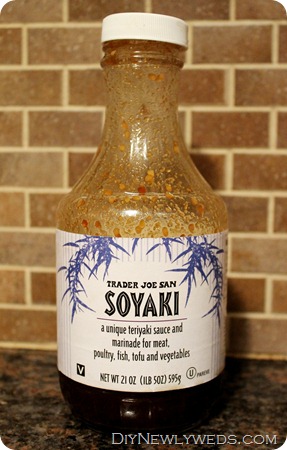 I added sliced baby portobello mushrooms, scallions, and frozen green beans to my stir fry and cooked until the seitan was browned.  I also added some some black sesame seeds for fun towards the end. 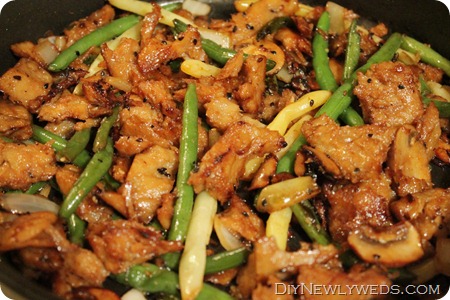 So easy, right?  Once cooked, I served it on top of some pasta.  Rice or quinoa probably would have gone better with the seitan stir fry, but I was in the mood for pasta and had finally found whole wheat elbow macaroni at the store and really wanted it (why do only some pasta shapes come in whole wheat?!)
And let me tell you, it was absolutely delicious!  Even my husband who still eats meat from time to time thought seitan was absolutely delicious!  He has been calling it his new favorite food since this dinner.  Sorry for the at-night photos, but it was dinner time and I was too hungry to mess with taking photos! 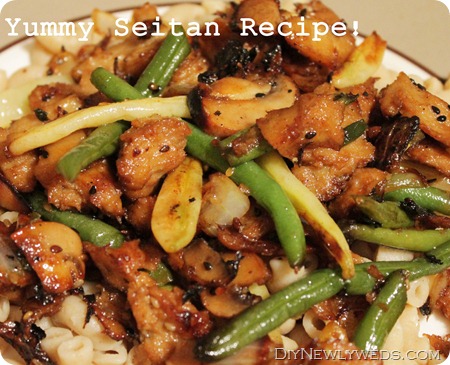 So that’s my shocking twist and seitan recipe.  It was so quick and easy, I can barely call this a recipe, but it was too tasty not to share.  Have you ever tried seitan ?  Are there any other part-time or full-time meatless eaters out there?

Brandi @ His Shabby Her Chic said...

I pinned and hopefully I'll make it sometime soon. Lucky for me there's a Trader Joe's not too far away.

We bought this seitan at Whole Foods, but my hubby was at Trader Joe's today and they have a wide variety of it too. I'll let you know how TJ's brand is.