Happy birthday to my dear hubby Rob!  Although today is his actual birthday, we celebrated Rob’s birthday this past weekend.  And because I think you’re never too old for a theme party, I decorated the house with Phillies baseball decorations.  I even made my first ever attempt at cake decorating!

Rob doesn’t like traditional birthday cakes (weird I know!), so I made him cupcakes instead.  First I made chocolate brownie cupcakes from this Woman’s Day recipe (I substituted the eggs with “Better’n Eggs”).  I also made chocolate cheesecake cupcakes from this BakeSpace recipe (I substituted the cream cheese with low-fat cream cheese).  I enjoyed both types of cupcakes, but Rob preferred the cheesecake ones.
However, since I planned to decorate the cupcakes, I didn’t make either of the frostings included in the recipes.  Instead, I made my own frosting by just mixing a little confectioner's sugar into light Coolwhip.  I prefer this frosting because it’s healthier and not super sweet like traditional frosting.

I decorated the cupcakes with Phillies and baseball designs using Betty Crocker Decorating Icing and Wilton Color Mist food color spray.  I must say that although the Betty Crocker icing was very tasty, the decorating tips it came with were nearly impossible to use.  I had a lot of difficulty controlling the icing as it came out and wouldn’t use this icing again. 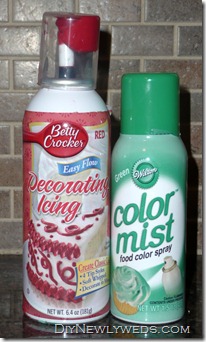 I was pretty disappointed I couldn’t design the cupcakes how I had hoped because of all the difficulty I had with the icing, but I managed to make a few baseball cupcakes,  Phillies “P” cupcakes, red sugar cupcakes with “All Star” flags, and even Philly Phanatic cupcakes! 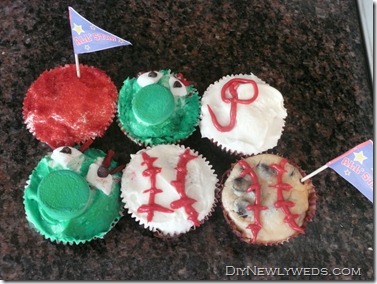 My favorite cupcake was the Philly Phanatic cupcake I invented.  Check back tomorrow if you’re interested to see how I made it. 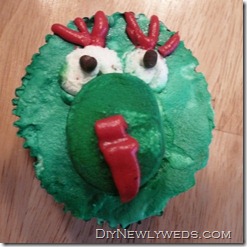 Despite my decorating mishaps, the baseball cupcakes were still a hit and Rob loved them!  Here’s all of the cupcakes at the party: 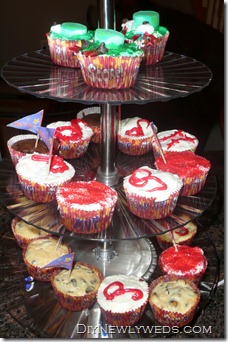 This post is shared on Blue Cricket, stop by and check out some of the other great projects featured.