Most Expensive Homes in America

Any horse lovers out there have any extra $175 million dollars laying around?  If so, you might be interested in the Jackson Land and Cattle ranch  that was listed for sale earlier this week.  The ranch that's just outside of Jackson Hole, Wyoming is currently the most expensive home for sale in America


For one easy payment of $175 million you can own this 3 bedroom home on 1,750 acres.  But wait!  If you call within the next 5 minutes, we'll also throw in three fishing ponds, a spring creek, and view of the Rocky Mountains! Doesn't everything sound better as an infomercial?  Realtors, take note.
Photo Source
For America's most expensive home, surprisingly the home isn’t the main selling point at all.  The actual residence is a barn that was converted into a 3 bedroom home and the property also comes with a four bedroom guest house and two employee apartments.  But the real selling point is a 52 stall equestrian center.
Photo Source 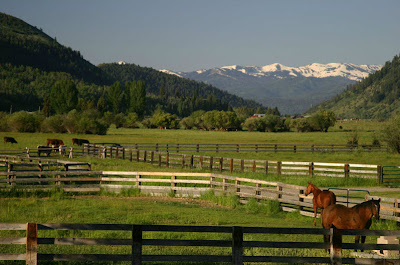 Photo Source
But if enormous LA mansion is more of your thing, you just missed your chance on the Spelling Manor.
Earlier this month Aaron Spelling's mansion, the previous title holder of most expensive home for sale, sold for an estimated $85 million (down from the original listing prices of $150 million).
Photo Source
The 56,500 square foot mansion comes complete with three stories, seven bedrooms, elevator, five bars, bowling alley, and dog grooming salon.  The 4.7 acres also holds a pool complex and tennis courts.
Photo Source
And apparently it comes with a dining room big enough for 20 people which I imagine makes it tough to pass the potatoes at dinner.
Photo Source
Back in March, another one of America's most expensive homes sold- a 25,000 square foot mansion in Los Altos Hills, California.  The house is estimated to have been sold for between $75-$100 million dollars.

Photo Source
The home sits atop 18 acres overlooking the San Francisco Bay and has a north and south wing.  You know you're rich when your house has separate wings!  They must get a lot of exercise walking from one end of the home to the other.
Photo Source
The north wing includes a ballroom, home theater, spa, and wine cellar.  The south wing of the mansion contains family living areas and bedroom suites.
Photo Source
Photo Source
I can't imagine what I would do with all of that space, even if I did have hundreds of millions of dollars to spare.  But think of all of the DIY projects you could do in a house that size!